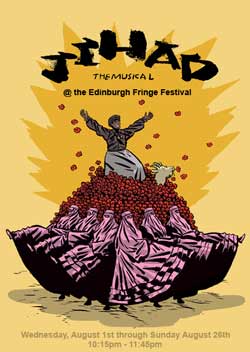 The hilariously titled ‘Jihad The Musical‘ is playing at the Edinburgh Fringe Festival. The musical revolves around a young Afghan peasant, Sayid who innocently works for a company which exports poppies to the West. His life takes a downward spiral, as he is brainwashed by singing and dancing jihadis – who want him to join their nefarious schemes. His only hope to get out of this mess is his no-nonsense sister and a ‘surrender-prone’ Frenchman.


Featuring songs such as ‘I wanna be like Osama’ and the love ballad ‘I Only See Your Eyes’, JIHAD THE MUSICAL is a madcap gallop through the wacky world of international terrorism; one that puts the powers that be in their place, and that invokes the Blitz spirit that we must laugh at those who seek to intimidate us. Stand back! This is a high-kicking chorus line!

Song from the Musical – I wanna be like Osama.
[youtube:http://www.youtube.com/watch?v=eeDDb5VYwbY]

Think it will ever work on Broadway ?