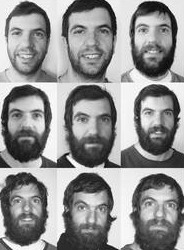 The book was about Jacobs’ attempt to live by the Bible and follow every single rule in it, for one whole year. And that meant dressing in white clothes, growing an untrimmed beard, wearing sandals and having a walking stick (similar to that of Moses’ in the Ten Commandments movie, I suppose). Oh, plus avoiding his "impure" wife during that time of the month.

One part humorous, one part thought-provoking, the interview is an interesting read.

Some call this ‘cafeteria religion,’ and it’s meant as a disparaging phrase. But I say: There is nothing wrong with cafeterias! I’ve had some great meals at cafeterias. I’ve also had some turkey tetrazzini that made me dry heave. The key is to chose the right dishes – the ones about compassion and tolerance, and leave the ones about hatred and intolerance on the side. So in my year, there was this amazing balance between choosing your religion, which then leads to fewer decisions on a daily basis.

And finally, I’d call myself a reformed individualist. I still see the value of individualism, but I’ve taken it down a few notches. As one of my spiritual advisers told me, you can look at life in one of two ways: As a series of rights and entitlements, or as a series of responsibilities. The biblical way is to look at it as a series of responsibilities – to your family and to your society. It’s like the JFK quote – “ask not what your country (or world) can do for you, ask what you can do for your country (or world).”

Link to the interview. Great Stuff.