Eric Joisel is a French artist who creates some stunningly beautiful origami paper models. These are not your regular origami models, but can only be described as a modern take on the ancient art. 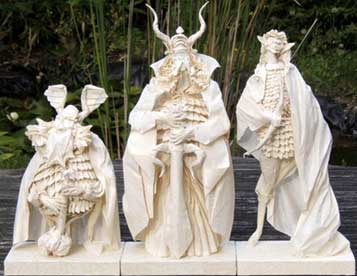 Before I was able to attempt folding a complete human figure, I practiced making masks and faces for many years. This was more than just production, it was the process of breathing life into the paper and most importantly, partially improvising with every model so that each one was distinctive. This is different than traditional origami where every step is exactly defined so that folders could produce accurate copies.

Most of his models are three dimensional and lifelike in appearance. His designs were inspired by the works of origami master Akira Yoshizawa, who was considered by many to be the best exponent of the art, during our times.