Deep beneath the rocky ground of the Valchiusella valley in northern Italy, lie the nine Temples of Damanhur, whose incredible beauty and scale stunned the Italian government into calling them the "Eighth Wonder of the World.”

The temples were not built thousands of years ago, but only in the latter part of the last century. The huge underground structures were the extraordinary vision of Oberto Airaudi, a former insurance broker, and as some people claim, the possessor of paranormal powers. 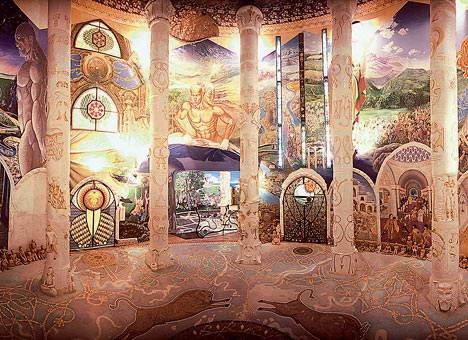 He was helped by thousands of like-minded volunteers – the ‘Damanhurians’, who tirelessly toiled for 16 years to convert his grand dreams into reality. It was only in the early 90’s, that the local law officials "gently" persuaded the group to allow them to take a look at the temples. What they saw next, overwhelmed and amazed them. They found miles of intricately decorated tunnels linking huge chambers with giant glass domes, tall columns embellished with real gold, stained glass windows, murals and more.

If you want to see more pictures, visit this site.