The TENORI-ON is an electronic interactive device featuring a touch-screen interface consisting of 256 led buttons which can be manipulated to create music. Billed as the musical instrument for the 21st century, the Yamaha TENORI-ON was the result of a collaboration between interactive media and installation artist Toshio Iwai and the Yamaha Corporation. 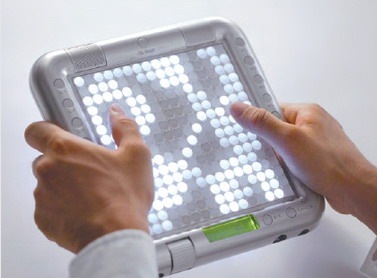 The  interface is intuitive and visual, all thanks to the interaction between light and sound.

The TENORI-ON 16 x 16 LED button matrix is simultaneously a performance input controller and display. By operating and interacting with the LED buttons and the light they produce you gain access to the TENORI-ON’s numerous performance capabilities.

The TENORI-ON provides six different performance and sound/light modes for broad performance versatility, and these modes can be combined and used simultaneously for rich, complex musical expression.

There are two high quality speakers built into the device, and a LCD display on the bottom provides additional information. The device has a SD memory slot, midi port and a headphone connector as standard options.

You can visit the product micro site to watch some stunning videos of the gadget in action. There are also videos and downloadable music samples of performances by musicians on the musical instrument.