Craig Davidson, a Canadian novelist, attempted to live the life of the main character of his first novel by injecting himself with illegal steroids over a period of 16 weeks. 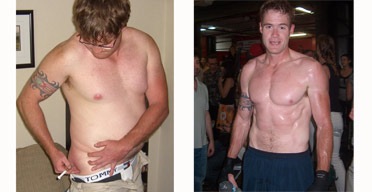 The results were quite dramatic to say the least.

He not only increased his body weight by 35 lb in less than four months, but also was able to transform his body into a shape, which most men would workout for years in the gym to possess. Unfortunately, for Craig, the steroids had devastating side-effects on his health. He described his harrowing ordeal in an article in the Observer.

Then one morning I was showering, I looked down at my shampoo-foamed hands, and saw dozens of red strands between my fingers. Soon they were everywhere: on my pillow, between my teeth, falling into the pages of books while I read. I became hyper-aware of the way wind felt through my hair: colder on the top of my skull, where there was less protection. And not just my head: the hairs on my arms and legs, even my testicles, were falling out. Not a single follicle seemed firmly moored to my skin.

Then, one sleepless night (the steroids also triggered insomnia) my testicles shrunk. Testicular atrophy is the most well-known side-effect of steroid abuse. It’s an inherent irony: here you are trying to turn yourself into an über-man while part of the most obvious manifestation of your manhood dwindles before your eyes.