The animated, Direct-to-DVD  Batman: Gotham Knight is a series of six animated tales set between the events of Batman Begins and The Dark Knight.

Completely dark and somber in tone, the films in the series were written by some talented, award winning writers like Alan Burnett and Josh Olson (of A History of Violence fame). And as with the very brilliant Animatrix,  the films were all created by top Japanese Anime artists and directors.

The animated anthology is a rare specimen in the DC universe, as it’s to be released under a PG-13 rating in the U.S. and a 15 rating certificate in the United Kingdom on July 8.

Watch a five minute clip from an episode in the series titled "Crossfire." 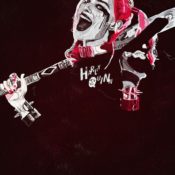