As part of an unique experiment, Ilya Shnaydman, a super-geeky resident of Philadelphia, mailed a letter to his girlfriend in NY. Instead of putting a stamp on the envelope, Ilya taped 39 cents in loose change (plus 5 cents as a tip to postal worker) in its place. 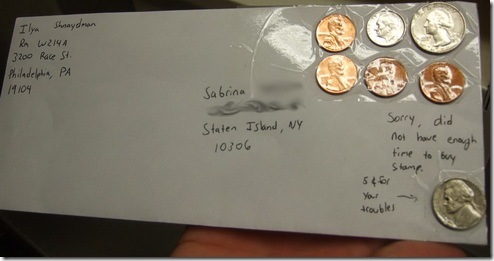 You will have to visit his blog to know whether the letter reached his girlfriend or was returned back to him.

I really wouldn’t recommend trying this, as the Postal Service is quite overwhelmed already.