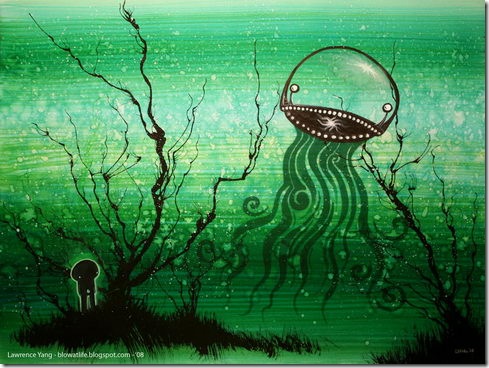 Starkly silhouetted figures set against intense background washes work to create an atmosphere of wistfulness and reflection.  As the figures meet in each scene, something is gained and something is lost.

The artist has an upcoming solo show in December, titled “sideshow”, at the Given art boutique in San Francisco, CA. Interestingly, the boutique is located at 575 Castro Street, the historic address of the camera store of Harvey Milk.  Given was closed for six weeks to shoot the Gus Van Sant’s biopic based on Harvey, “Milk”, at the same location.

Check out the artworks of Lawrence Yang.