The billboards put up by the Advanced Medical Institute, promoting a nasal spray to treat premature ejaculation, prompted 45+ calls from outraged viewers. Believe it or not, but this was the toned down version of their previous campaign.

Sensing the mood of the public, the institute voluntarily withdrew the campaign.

Virgin Mobile’s ads are usually quite risqué, but fun to watch. The ‘Go Topless’ commercial featured a topless young woman covering her ‘assets’ while talking on the phone. The ad received over 45 complaints, but was not banned.

Sadly, I was unable to find the said commercial on the net. To make up for it, here are two typically raunchy Virgin Mobile commercials.

Note: The ads are slightly NSFW.

The anti-abortion group, Tell the Truth Coalition, mailed thousands of pamphlets with pictures of dead fetuses to unsuspecting residents of Melbourne, Australia.  The bureau received only 45 complaints, but promptly banned the ads. As this is beyond appalling and in extremely poor taste, I’m not going to post the pictures or the link.

This one is a genuine head-scratcher. Coco Cola released this commercial to promote their re-launch of Mother energy drink.

The ad showed a SWAT team raiding a lab, and then violently taking down the scientists who were responsible for making the original version of the energy drink. The bureau received over 50 complaints about the commercial, and decide to ban it.

This one proved to be traumatizing for parents of young children. A young child, separated from its parent at a train station, starts to panic and then cry. The ad asks you to imagine how he’ll feel if you die from smoking.

The bureau received 65+ complaints, but thankfully, the ad was not banned.

This commercial for Inghams implied that there was something wrong with people if they didn’t like to eat chicken.

The ad received more than 100 complaints, but wasn’t banned by the bureau.

This was the original phrase used in the billboards for the Advanced Medical Institute. Reportedly, the ad made one child ask his mother, "How long is it supposed to last?" 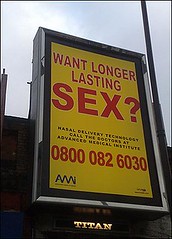 The ad received more than 110 complaints from Australian residents, and the bureau promptly banned it.

This terribly planned and executed commercial for Domino’s had a fat man named ‘Mary Toppins’, and a groan inducing catchphrase “SuperCalaFreakinAwesome.” Viewers made over 145+ calls complaining that ‘freakin’ sounded more like ‘friggin’.

The commercial wasn’t banned, but it certainly should have been. They should have also put the copywriter and the entire ad department into prison (with no chance of parole), and then thrown away the keys.

Kotex’s U Tampon commercial had an attractive woman going on about her daily activities, but with a beaver in tow. Viewers are told, "You only have one of them, so look after it."

The ad received over 185+ complaints, but the bureau decided not to ban it.

So there you have it. The top 10 ads which invited the most number of complaints in Australia. People are not really that different, down under.

[Hat tip to The Daily Telegraph]