Type-designer and illustrator Nate Piekos outlines the grammatical conventions unique to the comic book medium. He learned these rules while lettering various Marvel and DC titles over the years.

Burst Balloons are used when someone is screaming their dialogue. 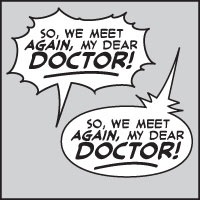 They tend to be more irregular and chaotic than the radio balloon, perhaps with a heavier stroke. Burst balloons typically aren’t italicized, but are often bold with certain words enlarged or underlined for even more emphasis. A less punchy variation on the burst balloon is a regular balloon with a small burst where the tail meets the balloon.

If you want to learn more about comic book lettering, here are some interesting books on  the same – The Comicraft Way and the DC Comics Guide to Coloring and Lettering Comics.