In honor of Steven Slater, the now (in)famous JetBlue Airways flight attendant, who chose to quit his job in the most unconventional manner. 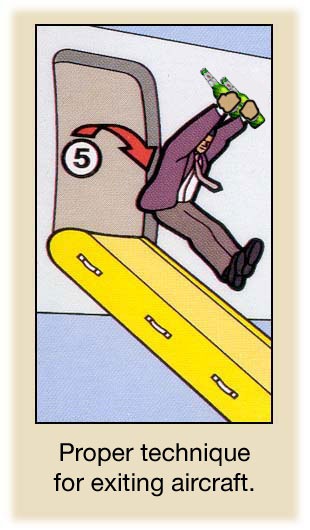 Snip from his Wikipedia page:

Initial reports indicated that as JetBlue Flight 1052 taxied to a stop at JFK Airport, a passenger stood up to retrieve their bag from the overhead compartment. Slater instructed the passenger to remain seated, but was struck by the passenger’s bag as it was removed. When Slater requested an apology, the passenger responded with obscenities, instead.

According to one passenger, Slater returned the obscenities over the plane’s public address system: "To the motherf***** who just told me to f*** off, f*** you. I’ve been in this business 20 years. And that’s it, I’m done." He then activated the emergency inflatable slide, grabbed two beers and slid down the chute. Slater then reportedly ran to his car and drove to his home in Belle Harbor, Queens.

Image via Free Steven Slater (the site is down at the moment).