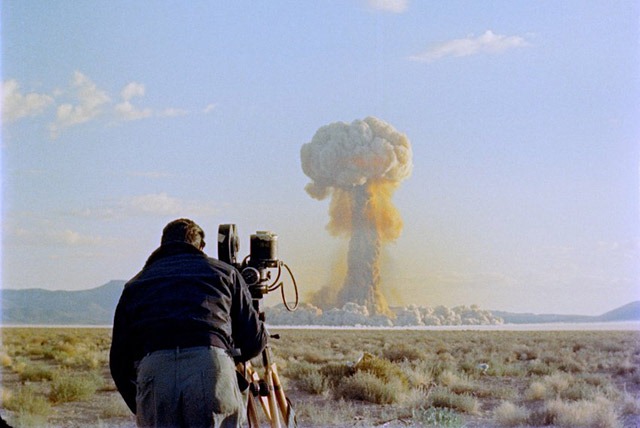 The 40 photographers and cameramen of the 1352nd Photographic Group of the US Air Force, captured images of more than 200 nuclear tests conducted by America in the Nevada desert and the Pacific Ocean.

These brave, but unfortunate men, often worked without even the most basic protection, working only with dosimeters that measured the dangerous radiation loads. Most of them died long ago, many due to cancer, having been exposed to insanely heavy amounts of radiation.

The atomic missile with the explosive power of 1.5 kilotons of TNT detonated precisely above the heads of the five United States Air Force scientists. At first the men felt only the heat from the explosion. But then the blast wave forced them to their knees.

At 7 a.m. on July 19, 1957, the cameraman was standing with a small group of nuclear scientists on the Yucca Flat test site in the state of Nevada. A fighter jet had fired the missile at an altitude of five kilometers (3.1 miles), which was considered a safe distance from the ground. "I was busy behind the cameras," Yoshitake recalls. "Then I could see the flash go off out of the corner of my eye." He looked up. "There was this huge, doughnut-shaped cloud up in the sky where the blast when off."

The only thing protecting him from the bomb’s fallout was his baseball cap.

This stunning photo gallery has some of the pictures which were declassified by the US military, thanks to the efforts of documentary filmmaker Peter Kuran.