A time-lapse video of a whole night, captured at the ESO ALMA Array Operations Site, located at 5000 meters above sea level on the Chajnantor plateau, in the Atacama desert of northern Chile.

As the Moon sets at the beginning of the night, three of the first ALMA antennas start tests as part of the ongoing Commissioning and Science Verification process. Because they are pointing at the same target in the sky at any moment, their movements are perfectly synchronized.

As the sky appears to rotate clockwise around the south celestial pole (roughly on the upper left edge of the video), the Milky Way goes down slowly, until it is lying almost horizontal before sunrise. The center of our galaxy becomes visible during the second half of the night as a yellowish bulge crossed by dark lanes in the center of the image, just above the antennas.

Visit the official ESO site to see one more video taken from a different viewpoint. 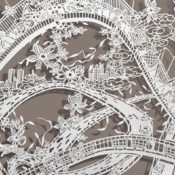