According to an article on Ohio.com, the Ohio Bureau of Motor Vehicles rejected 1,574 requests for vanity plates during the past two years. Though the vanity plates don’t come cheap… 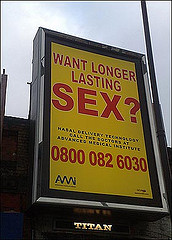 END_OF_DOCUMENT_TOKEN_TO_BE_REPLACED

“The Indian Ministry of Information & Broadcasting is, in its wisdom, trying to ban a rather harmless television commercial for Axe Dark Temptation deodorant. Terming it “indecent, vulgar and repulsive,”  the Government has written to the Indian Broadcasting Federation to stop the telecast of the commercial on various TV channels.

Don’t these idiots know that people can watch it on Youtube, anytime ?”

END_OF_DOCUMENT_TOKEN_TO_BE_REPLACED

Continue ReadingAxe Dark Temptation Ad – To Be Banned in India