Yeah. The iPad was a big colossal disappointment for people (including me) who were expecting nothing less than the alchemist’s stone from Apple. So, who better than Bruno Ganz as…

Continue ReadingHitler Rants About The iPad

Bruno Ganz’s brilliant and electrifying turn as Hitler in Der Untergang  has been parodied many times before. The spoofs were created by mashing up scenes from the film with fake English subtitles. Obviously, it’s funny only for people who can’t speak the German language.

And now, there is one more addition to the list. The latest viral video shows Hitler ranting against Hollywood’s fat-cats for changing the Watchmen movie’s ending. Or more specifically, the absence of a multi-tentacled monster in it.

Watch it after the jump. (The clip is NSFW due to bad language.)

END_OF_DOCUMENT_TOKEN_TO_BE_REPLACED 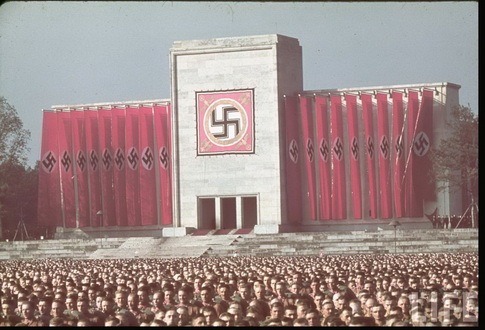 A Live Journal user posted this collection of rare color photographs (includes one NSFW pic) captured during the Third Reich German era. The photographs, clearly taken from the Life photo…

Continue ReadingColor Photographs From The Nazi Era In Germany

You show them, Charlie! Charlie Chaplin was a true master of the silent film era. Though he did not have the advantages of modern technology, he was one of the…

Hitler gets banned on Xbox Live